Well it’s been a long time since I did any blogging and a lot has changed for me.

I am fast approaching 61 and have had  a few of those times when I felt my age. I had to quite running because of an injury to my failing knees during a cross country run. I had hopped to be able to make it to ultra trail runner but didn’t quite make it. I have missed running. I have had some minor surgery on one knee now and things have gotten much better. My running now doesn’t consist of more than a 1K warmup run but things still work and nothing hurts.

Because of my knee issue I have also decided to leave karate. All of the twisting, turning and kicking was just to much for my knees. I make it as far as brown belt. Again, I enjoyed it but it just became to big of a risk for me.

I went for almost a year feeling a bit lost without something really physical to do. I took up hiking and was hiking back into back country campsites for a few days at a time but that quickly caught up with my knee issue so I had to call it quits on that. What now?

Time passed, I got more and more out of shape and frustrated. Then, I noticed that there were quite a few people around on bikes. More and more all the time. There must be something to this I thought. I bought my first bike in almost 50 years. Nothing fancy, just a Canadian Tire mountain bike. And guess what? It was fun!

I talked with my surgeon about it and he told me to go ahead and try it. After about 9 months, I was back for a checkup and he told everything looked very good and to keep going. He then added that I should push it a bit as well. Shortly after that I had purchased a reasonably good road bike and completed my first 100K ride.

Now I have 3 bikes. My original mountain bike, my road bike and a bike permanently set up in a trainer in front of a big screen TV.
So, things are turning around. So far this year with a combined total from indoor training and outdoor riding, I have logged just over 3,050 kilometres along with an elevation gain of  23,500 meters. Not bad for an old fat guy!!

So today we are on vacation traveling out to the Magdalen Islands with stops along the way out and back. And of course, we have the bikes with us. Can’t wait to get to the islands! 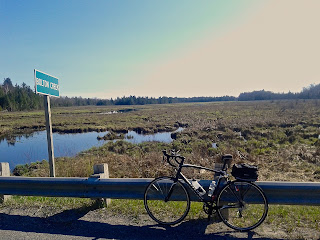 I have included a link to my Flickr page where I will be uploading my photos from our trip as it goes along.
Magdalen Island Trip
Posted by BCjet at 9:39 PM