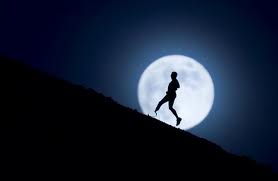 For the last few months I have been very involved in big project at work. As things get closer and closer to our deadline for the project, I find myself working some very long days. This has caused me to miss a few karate classes and it makes it very hard to get my runs in. The job is very interesting and I am working with a great team of people but
I need to do what I can for myself as well.

A couple of days ago I got home just after 9:00 p.m. It had been a very long and very busy day. I was taking my breaks out on the production line, lunch was get-a-bite-when-you-can and dinner was going to be just before bedtime. Not that healthy, I know. That night I just had to go out and run. Why not? I had run in the dark a number of times during the winter, including being out on the road New Years Eve at midnight to bring in the new year. But this would be different.

The night was warm and humid. There was a strong southerly breeze blowing, the moon had still not risen but the sky was clear. So as soon as I came in the door, I changed into my running gear which included my reflective vest, my hat light and a red flashing light I wear on the back of my vest. In 15 minutes, I was geared up and heading for the door.

As soon as I was outside, I did my usual thing, I started up my Garmin watch and turned on my iPod. I thought I would listen to some old-time jazz for this run. I walked down to the end of my driveway, turned on my lights and headed down the road.

It didn't take long for me to realize just how dark it was. To compound this, the stiff breeze that was blowing was kicking up dust along the dirt road. My vision was not only limited by this little LED light on my cap, it was confounded by all the dust in the air. My eyes kept trying to focus on the dust particles that were right it front of me, glowing from the light on my cap. I could hardly even see my feet, never mind the road. But that wasn't going to stop me that night. I needed that run. Just 5K. It would feel good.

As I progressed, my eyes started to adjust to the conditions. After about 1.5 kilometres, I turned onto the paved road. The dust seemed to dissipate. My vision was getting clearer. At least I could see my feet and see the road under them reasonably well.

At 2 kilometres I began to feel a bit like I was running in a tunnel. The bush on both sides of the road was fairly thick but now it seemed like the walls of a tunnel. I looked up and saw that the tunnel had a beautiful starlit ceiling.

At this point, I thought there was no point in listening to my iPod. It was beginning to seem like a distraction, so I turned it off. I was just coming up to a spot along the road where there is small marsh. I could hardly believe my ears. The din from who-knows-how-many frogs filled the air. It seemed almost deafening. I was tempted to hold my hands over my ears. It was amazing. How many frogs could there possibly be in that little patch of wetland?

As I continued on and went around a turn, just about all of the meager light in the sky was gone. There are very few streetlights out here; during this run I would pass only two. To compound this, at this time of year there is no snow to reflect and spread any of what little light there was. Now, no snow and no moon, no streetlight, no light. The ground around me just seemed to absorb even the light from my LED cap light. I turned off my cap light for just a couple of steps to see what it would look like. Total darkness. 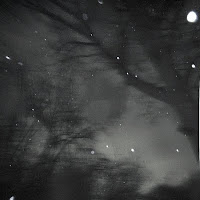 I pictured this section of road in the daytime. Yes, no wonder it seemed so dark now. The road was almost completely canopied by trees. The only light left in the world was coming from that little LED light on my hat. Nothing else. But then I heard something moving towards me from behind. It was moving fast, very fast. It was the sound of the wind coming up to catch me. It rushed around me in waves. What an amazing sound. No doubt I have heard it many times before, probably in this very spot. It just had never been amplified like that by my diminished sense of sight.

I continued around the curve and the tree-tops separated. There at the top of hill I could see the stars again. And about half way up in the sky was Mars, a beautiful little red-orange pinprick in the sky. I am an amateur astronomer so this scene just kind of jumped out at me. As I approached the top of hill, the sky just unfolded in all its beauty right there in front of me. It made me wish I could have run with binoculars. Wouldn't that have looked silly? Not that there is anyone out and about to see me.

It was about this time I noticed my Garmin vibrating. I looked down at my watch and had to shake myself a bit. I looked around at where I was and realized I was now just over 4K out on my 5K run. What the heck, I was enjoying the run and the next K would be open to the sky as well. So I looked up at Mars and kept going for another kilometre before starting back. 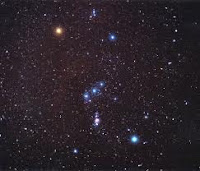 As soon as I turned around, there in the sky to my left was the constellation Orion and just off to the right was the brightest star in the sky. Not really a star though, it was Venus. Quite beautiful. The skies up where we live are very dark and on clear nights like this, it can be breathtaking.

As I continued back, I went back down into the area that was heavily treed. The stars began to disappear as the walls of the tunnel came back up. The other senses seemed to take over. Again, I could hear the onrush of the wind coming toword me in waves like giant waves of an ocean. The sound of frogs and insects was everywhere. It was so different from when I had run at night in the winter. There was so much life all around me, not just the sound of crunching snow and ice. At this point I was very aware of the fact that all my senses had turned on and were working. I felt like I could almost feel my surroundings because I could see very little of them.

With less than 2K to go before I reached my driveway, another sense was trying to show me somthing. There was an odour that came at me with such force. It was strong and foul like something rotting. What was it? It was so strong that it was alarming. Why hadn't I noticed this on my way out? I couldn't figure it out, I just knew I would be glad to outrun that smell. On my daytime run the following day I looked for the source of it and easily found it. There in a ditch was a dead porcupine. It looked like it was killed some time ago and certainly smelled like it.

I don't too often run without all the little bells and whistles I like to have with me and I doubt I will become a minimalist runner. I like my toys too much for that. But it was quite an enjoyable experience to be out there in the dark surrounded by the life - and death - of the area I call home. It totally cleared my mind and let me focus on the here and now and enjoy the simplicity of it. I will do this night running thing again. 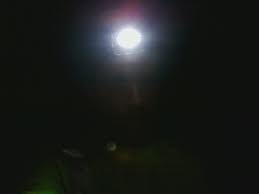