A Rock in the Path (Training for the Army Run) 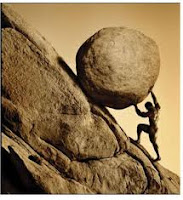 The day of the Army Run is getting closer. I have been spending all kinds of time training and training hard. I have just completed my first 20K run. When I reached my turnaround point, I was initially jumping for joy, then of course, I realized that I now had to run 10 more kilometers to complete this run. So, off I went.

At the end of the run, I had the feeling that I had just slayed the dragon. Three weeks to go and I now have the proof that I can do this. Three more weeks. Now all I have to do is think about getting stronger.

It took me about 2 hours and 20 minutes to complete this run. That time just disappeared. I spent the first half of my run going through katas in my head. I imagined myself going through each kata move by move, first on my own, then with an opponent. The movements were perfect, liker a dance. Move and countermove, we went through rensuku kumite. The next thing I realized, I was approaching my 10K turnaround point. The return run was same kind of thing. I was lost in thought as the kilometers clicked by.

Completing this 20K run has given me great confidence. I now know I can do this. I don't feel quite so naked. I know I have pushed myself hard to get to this point. My body keeps reminding me of this. When I finished this run, I felt good. I had not pushed too hard, I had no real aches and pains. I was very pleased. I took the next two days off to give my body a chance to recover and then went out for what was supposed to be a gentle 8K run.

I was very surprised to find that after about 6K my legs and hips suddenly started to get quite sore. I decided the best thing to do was to walk the remaining 2K rather than risk injury. Two days later at karate, we were doing something called shrimping. It is a very tough exercise where you move sideways along the floor propelling yourself with nothing more than your shoulders and hips. I find this very tough on the abs. It is an exercise I have always found almost impossible.

Well, this time I was feeling strong and ready to prove to myself that I could do this. I threw myself into it with everything I had. I made it all the way across the floor for the first time and quickly jumped up and headed back into the line for the second run at it. I hit the mat knowing I could do this. Away I went.

I got about halfway across the floor when I got this shooting pain in my right hip. I stopped and the pain stopped. I thought for a second that I had just twisted funny causing a one-time hurt. Away I went again, and again this shooting pain penetrated deep into my hip joint. It felt like I just got stabbed. Sensei saw me drag myself to my feet in pain and she told me that training was over for me tonight.

She was right. Here I was again, injured. But this time, it was different. I was injured but I knew enough to stop (with Sensei's help). Sensei is aware of my upcoming run and she was very concerned that this was going to interfere with the run. I reassured her that it wouldn't and I knew this was the case. But I also knew it would slow my training down again.

So there I was, TWO WEEKS TO GO and not able to train. I found myself quickly getting frustrated and a bit depressed. There always seems to be something that comes along that gets in the way of my progress. I began to think that maybe I was just asking too much of this old, out-of-shape body. Why am I doing this anyway? Why is there always something in my path that blocks my way?

Two more days went by. For the first day, I was limping quite badly. The second day, not so bad. By the end of the day, the limp was gone. I still felt a bit stiff in the hip but not bad. Maybe, just maybe this old body is not so old. Maybe it is not so out of shape. Maybe, I have to stop being so hard on myself.

Two weeks to go as of today. I had booked this week off from work to work on cutting a walking/snowshoeing path around the outer edges of our property. I also thought that this would be a good cross-training exercise. The bush is thick and it would be hard.

I was around a half kilometer into the trail when I came across this big rock sticking out of the ground right where I wanted my path to go. I stood there for a minute, looking at this thing in my path. Here we are again. Another rock in my path. It then kind of clicked. I can do this. A couple of years ago, I would have quit. There was no real other way around. The rock had to go and I would not have been able to do anything about it.

Now, things are different. I got out the shovel and crowbar and went at it. It wasn't insurmountable. After about a half-hour of digging and prying, the rock came loose. I then had to dig a ramp up out of the hole. Then, with a strap around the rock, I slowly worked it back and forth, pulling it up and out of the hole and off to the side of my new path. My way was clear.

I left it right there where I could see it every time I went by. A reminder to me that there are often going to be things in my path, but if I work at it, I can find a way through. Like my training, two steps forward, one step back. Overall, progress is being made. I can do this! 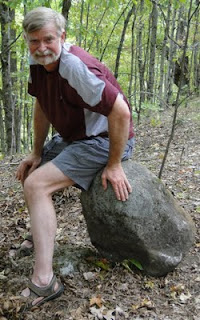