I have been working at Goju Ryu karate for about a year-and-a-half now. I have had the opportunity during this time to lead the class a couple of times in warm-up exercises. It is a normal thing for Sensei Laurie to do. Giving students of different ranges of experience a chance to take a small but important lead during class is a great thing.
The first time I did it, I was quite nervous about it. I had to stop and think as to just what we should be doing and what should be next. Sempai Frank picked up on this the first time and suggested I just relax and breathe. Good advice. As it turned out, I really enjoyed doing it.
That really should not have been any kind of surprise to me. I do some training at work and I have always enjoyed doing that, but this was different. Karate was and still is something very new to me. Here I was being encouraged to lead the beginning portion of a class. Very cool! As you know from my earlier postings, karate has very quickly become a very important thing to me and here I am in a small leadership role.
Over the past few weeks we have been focusing on our fitness level. Sensei has asked us to think of something we would like to work on. This is all being done with some focus on the upcoming Kilt Run. This is an 8K run in Perth where most of the participants run wearing a kilt. Quite a novel idea put on by the local running shop called The Running Goat. 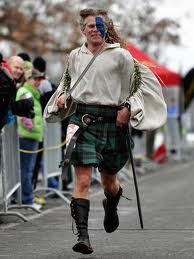 To get off on a bit of a tangent, I very clearly remember driving back into town last year after being away on vacation to see all these people running around in kilts and many of them had their faces painted blue. I thought the whole town had gone crazy. What a sight!
To get back on track here, I thought since I had just started running myself and doing quite a bit of research on different exercises for running, I would volunteer to put together an exercise routine for one of our classes geared specifically toward running. Sensei thought it was a great idea and encouraged me to put it together and do it. I could have as much class time as I needed for it. This was great! The chance to share with the class some of my passion for exercise and a new-found love, running.
I spent the next week putting this together and was all ready to go when I managed to injure myself. I pulled a calf muscle and my Achilles tendon. I had to go to Sensei and ask for an extension in time so I could be 100% ready to lead and participate in this class. Next thing that went wrong in a manner of speaking, was work. Working for a living can really get in the way sometimes.
Actually, the job that came up was part of a very big project that I have a part in. Very exciting stuff so I shouldn't really complain. The end result of these delays was me getting more nervous about such a big deal as leading the class through a routine that I designed.
Sensei Laurie was great about the delays. It did not seem to concern her a bit. She just encouraged me to keep working on it. And work on it I did. Probably too much. I took apart the routine and redid it so many times. The end result was the routine that I basically started with in the first place.
I decided that it would fun to name this routine so the first thing to come to mind was Eye of the Tiger, thank to Derek, a fellow student who seems to really enjoy a good hard workout. Thanks, Derek.
Finally, no more excuses. It was time to put up or shut up and for me, the second option just wasn't there. I had put together a music soundtrack and took it into the dojo. As I got started, I was feeling a bit anxious about it. I had spent quite a bit of time working on the tempo of the routine, trying to keep in mind the different fitness levels I would be working with and the ultimate goal of improving everyone's fitness level and most importantly, for everyone to feel challenged but to have some fun doing it.
As the end of the routine approached, I was very pleased to see everyone fully engaged and working hard but not stressed. I think I got it right.  What a great feeling! Everyone had a bit of fun and a really good workout. I was so thrilled to be able to share this with the group. Derek came up to me and told me he loved it. Thanks Derek! Eye of the Tiger my friend!
Here I am, an orange belt helping black belts and the rest of my fellow Karataka train. Wow! It was truly a great feeling to be so accepted and appreciated for what I could bring to the table. I am always so impressed with this club and with Sensei Laurie. Leadership and inspiration. Also this group of people I had the opportunity to share this with. Sempai Frank, Sempai Gordon and everyone else. What an amazing group of people.
At the end of the class, Sensei Laurie announced that the next fitness class done by me would be in three weeks. I think she liked it.
I have to admit to a bit of pride when the following class Sensei said that she was a bit stiff from the workout. It was a challenge to everyone there, including me! There are about eight of us that will be doing the Kilt Run. I am really looking forward to this. It is quite a privilege to work with this group of people and be part of the karate community.
Next workout, Rolling Thunder!