This didn't really occur to me until the end of the work day a few days ago. It was a typical day, very busy with many things to get done. At one point during the day, I was sitting at my desk in the shop specing parts for a machine that had broken down during the night. I also had another piece of equipment on my assembly bench that was waiting for me to finish preparing for installation.

Two of the guys from an area that I work in came in and asked me if I could have a look a piece of equipment that they could not get to run smoothly. I told them that I would be happy to, but I would be a few minutes getting to them. I needed to finish up with the vendor I was working with. They told me that would be fine and they could wait.

I continued with the job at hand with the plan of skipping the machine on my assembly bench and getting out to the line to the two guys that were in to see me to get their machine running better.

A couple of minutes later, these two guys came back into my work area with the piece of equipment they were having  trouble with on a cart. They thought it would be easier for me if I could just put it up on my second bench and tune it there in the shop. One of them said, "If you can't bring Mohammad to the mountain, bring the mountain to Mohammad."

I had a laugh with them over this comment, thanked them for bringing the equipment into the shop and I told them I would have it tuned up and ready in half an hour, which I did.
I pulled the cart back out to the production floor, found one of the guys who had brought it in to me and told him it was all ready to go back in. He thanked me and told me he appreciated my time and that he knew it would now work as good as new. I responded by thanking him and telling him that I was always happy to help them out whenever I could. He smiled, said, "I know," and proceeded to reinstall the equipment. It felt good to be able to help them out and I knew the bit of time I had just taken would make their entire day go that much smoother.

Then, on my drive home, I started thinking about this simple little exchange. It was not all that long ago that having these guys interrupt me to look at something that was working reasonably well would have done nothing more than make me angry.

I have been working on improving my health for some time and had started in karate, all in an effort to make my life better. I was doing all the right things but there was still something missing. I was to the point that I hated the idea of getting up in the morning because that only meant that I was going to have to go to work and face the unfulfilling, unrewarding day. It wasn't my fault! They just didn't understand me, or appreciate me. I was mistreated. I was getting myself more and more upset with every passing day. I was having trouble sleeping during the week because I knew the morning was just going to bring another working day in an enviroment that I saw as poisonous. I was starting to feel like there was no escape. I hated my job, I hated my life and I was a prisoner it. It wasn't even my fault! I wasn't doing anything wrong. Everyone else was.

My wife saw this monster slowly growing inside me even though I tried my best not to bring it home with me. She is my inspiration in so many of the things that are good about my life, so when she said to me that I really needed to do something before this feeling of dread over work drove me over the edge, I stopped and listened.

Looking back on it now, I don't really know just what caused this feeling or state of mind to come to be, but there it was, like a monster trying to take over my very soul. I was working so hard at trying to improve everything in my life outside of work, that I just didn't stop and think about the fact that this monster was turning into this huge anchor tied around my neck, dragging me down, making it almost impossible for me to realize just what this was doing to my life despite everything else I was doing.

The biggest victim of this monster was me.

I believe that because of all my other efforts to improve my life, this monster inside me was weakened. On the surface, it seemed to have control, to have its own way. But I had unknowingly weakened its footing. All that was needed now was to give this monster inside me a push. That was exactly what my wife helped me do.

That little push that made me look back at myself and see what was going on. That push and my work before it was enough to slay the beast within. I was amazed at just how quickly and easily this happened. And, just what a huge weight it lifted from my soul.

It has been several months now since I recognized the beast and put him in his place. I can't believe what a difference it has made. I feel freed! We all still have our challenges and Lord knows, I still have mine to deal with. Sometimes, the beast even tries to make a comeback. Waiting for just the right time and there he is, rushing to the surface to break out. No, not this time, not any time.

What I have come to realize through all of this is that there is no one else but me responsible for my state of mind. It is not anyone else's fault or responsibility but mine. I own this. That means I own the beast and he is going to do as he is told because now I am ready and able to deal with him and with life because I am KARATICA. 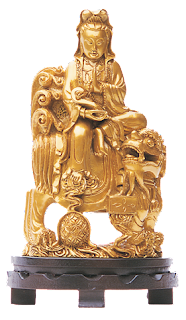 Manjusri (Wen-shu-shih-li; J: Monju)
the Bodhisattva of Wisdom. He sits serenely upon the beast of self, taming it with firm compassion and mindful awareness.
Posted by BCjet at 12:26 PM